A new study from researchers at the University of Texas Health Science Center at Houston shows that hospital visitors who smoke may be accidentally exposing vulnerable infants to toxic tobacco residue.

Thirdhand smoke, the toxic residue left behind on surfaces and clothes after smoking is finished, also sticks to the skin of those who smoke. This is a particular problem when people who smoke visit vulnerable hospital patients, such as those in the neonatal intensive care unit. These very young babies are at high risk due to weaker immune systems and immature organs.  Steps are now taken to ensure that visitors do not bring anything harmful into the intensive care unit, including providing hand washing or sanitizing stations in the Unit, and providing gloves and gowns to wear while visiting.

A research team led by Thirdhand Smoke Research Consortium member Thomas Northrup, of the University of Texas Health Science Center at Houston, has investigated which methods of hand cleaning are most effective at removing nicotine and preventing infant exposure. Dr. Northrup explains: “Approximately a quarter or more of infants in the neonatal ICU, or NICU, are visited by individuals who smoke or use tobacco, raising the potential for exposure to tobacco contaminants during hospitalizations. However, glove use, gown use, and handwashing or sanitization by visitors to the NICU can vary significantly across individuals—putting some infants at greater risk for thirdhand smoke exposure. For example, from dermal transfer of the hands of an individual who smokes.”

To study risk of thirdhand smoke exposure, researchers interviewed visitors of a NICU who smoked about personal and household use of and exposure to tobacco; smoking status was verified by exhaled carbon monoxide samples. The visitors who agreed to participate were assigned to one of two groups: one group washed their hands for 30 seconds, the other used an alcohol-based hand sanitizer for 30 seconds. Finger wipe samples to measure nicotine were collected before washing or sanitizing, after 5 minutes, and again after 40-60 minutes.  Exhaled carbon monoxide samples were collected a second time to make sure no one had been exposed to tobacco during the study.

The effects of handwashing were very short lived. This may be due to recontamination from the release of nicotine stored in the skin or touching contaminated objects such as clothing. In addition, the persistence and pervasiveness of thirdhand smoke means that it is difficult to avoid contamination left behind in shared environments. Nevertheless, these results present an opportunity for health systems to improve the resources available to families that visit babies in the NICU; more frequent hand washing and the use of gloves and gowns could significantly reduce the levels of nicotine these children are exposed to.

Dr. Northrup continues: “we hope that hospital administrators and practitioners will take notice and advise families of ways to reduce or eliminate tobacco use and exposure and encourage them to clean their hands frequently during visits with their infant, particularly if they live, work, or spend time in an environment where active tobacco use is occurring. Hopefully increased attention will spur intervention and research to make environments that care for infants and children as safe as possible.” For those families of small children who may be concerned, he adds: “the simple message is that there is no substitute for quitting tobacco and remaining completely tobacco-free as a household. We hope that interested members of the public will continue to support this work and that families with infants in the neonatal ICU will be advised and cautioned by their healthcare providers to attempt quitting and receive resources to do so.” 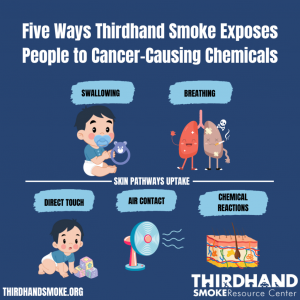